This page is intended as a place to record some of the side projects that I have worked on to help develop my technical skills.

A WIP project which aims to make the process of identifing learning goals and working on these with your team as simple as possible. The app clearly communicates what skill you expect you team to have in different roles and then work with them to set and review improvement goals. The tech stack was a python flask backend with postgresql for data storage and the infratructure on Docker.

This was set as a coding challenge for an interview but I used it as an oppertunity to pick up some new skills. In this case it was the first time using docker containers to develop a microservices application.

Cut Back was used as a way to learn the basics of Android development. The app is a simple tracker that lets you record what drinks you have drunk over time so that you can improve your health by reducing your alchohol intake.

During my final two years at Imperial College I became involved with the e.quinox project. I spend a lot of time developing a new solution to the rural electrification problem in developing countries. Previously e.quinox have focused on a kiosk model which has one central kiosk with a form of power generation, typically solar. Villagers will come to the kiosk and rent a fully charged battery box which they will use to power their lighting and charge mobile phones. Once the battery box is empty they return to the kiosk to rent another fully charged box and their empty box is recharged ready for another customer.

The new “standalone” solution removes the kiosk from the model so each box has its own solar panel and the box never need to be transported back to the kiosk. For this product we also developed a new payment system which uses a mobile banking application which is widely used in Rwanda and the surrounding countries. The standalone boxes are named the izuba.box (izuba = solar in Kinyarwandan) and were trialled in the northern Provence of Rwanda this summer. The wooden housing and final assembly of the izuba.boxes was all done in Rwanda by local people in the areas in which we launched the project. e.quinox izuba.box 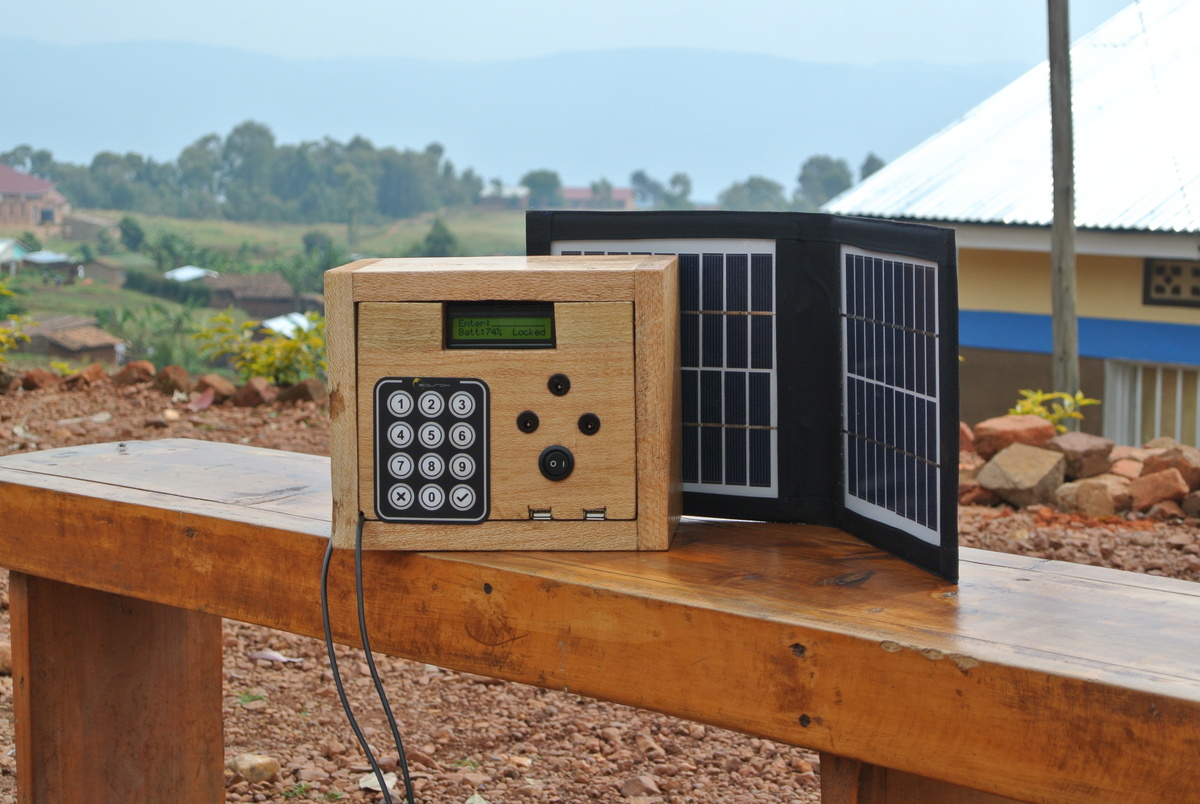 Initial survey shows the boxes are very popular – the sign-up list for the products already far exceeds the number of boxes due to be produced, with most of those signed up already paid the deposit to reserve a box. Whilst manufacturing the boxes, we have also started a very small trial of 8 customers to test the boxes. The testing has been quite successful with very good feedback. One of the trial customers runs a small restaurant in Minazi and now, for the first time, has light in both the bar section and the dining section of his building. It is certain that our boxes will help his business and is a very nice example of the impact we are having in rural areas.

We have also learnt many lessons and discussed many future improvements with the test customers and other people in the village. For example, in the next generation, we would like to add an output for powering an FM radio and also use the LCD screen on the boxes to display a clock when it is not being used to enter a payment code for the box. We also aim to redesign the electronics to make the final assembly easier, we will do this by mounting the USB and DC outputs straight on the PCB rather than on wires and screwed into the back of the wood.